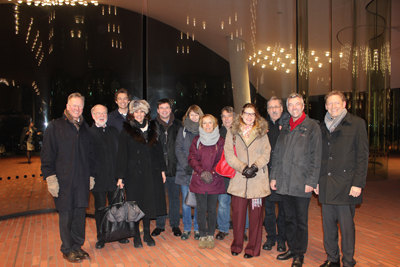 The sixth official meeting of the International Working Party «Spatial and Transport Development along European Corridors: An Example of the Corridor 22, Hamburg-Athens» took place in Hamburg, on the 15th and 16th February 2018.

Hamburg as a starting/ending point of the entire corridor is a significant logistic hub for a large portion of the Hamburg-Athens corridor. Two invited guests highlighted this role, however, also pointed out that the port of Hamburg is facing stagnation in transshipment, and even may face a decrease in importance in the forthcoming years until 2030.

Dr. Makait, CEO of MWP GmbH explained that the port of Hamburg is the main hub for sea-trade from or to eastern Germany, south-eastern neighbour countries and the Baltic sea. The port benefits of its strong hinterland connections, but is also limited by the restricted accessibility for very large ships. Since the concentration process to less but stronger alliances in the shipping sector is going on, changes in the routes of these market-dominating alliances result in significant changes of transshipment volumes in the affected ports. Against this background, the main growth in transshipment along the North Sea is expected in the ports better accessible by seaside like Wilhelmshaven or Rotterdam.

Mr. Heintzmann, deputy head of supra-local transport affairs division at the city administration Hamburg, focused on the importance of the efficient rail connections for the port of Hamburg. An outstanding accessibility by railway is essential for this port, since the operating range of inland shipping is limited due to topography and restricted navigability along the Elbe river. The present concept of two railway axis – Uelzen and Wittenberge – mutually guaranteeing accessibility by rail even in case of disturbance, will be strengthened in future by the federal investments into the capacity enlargements.

The International Working Party finalizes its working programme by the publication of a work report to the ARL. Additionally, a position paper is in preparation and will be presented to the Orient/east-Med corridor coordinator in June 2018.