Unpacking Spatial Planning as the Governance of Place 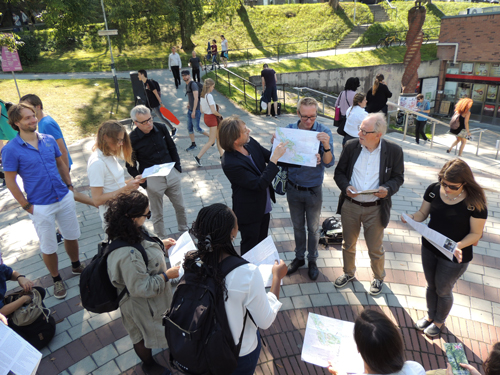 The ARL International Summer School 2016 was organised in cooperation with the Department of Human Geography at Stockholm University and dealt with “unpacking spatial planning as the governance of place”.

The summer school was attended by twenty doctoral students from different European countries. Professors Ulf Jansson, Peter Schmitt (both Stockholm University), and Rainer Danielzyk (ARL) led the participants through the three-day programme. Each doctoral student was given the opportunity to present and discuss the concepts, theories and empirical results of their dissertation project with the professors and fellow doctoral students. The projects showed a wide range of topics, including case studies from Great Britain, Canada, Germany, Sweden, Kenya and Ghana.

Emphasis was placed on the analysis of urban planning processes, actors, political structures, and concepts of democracy theory. In the context of urban planning, the discussion addressed common welfare, diversity, lobbyism, and gentrification, among other issues. An interdisciplinary perspective, integrating political and spatial sciences, was assumed in the discussion of conflict and collective action against wind power in Germany and Canada.

As keynote lecturers, Professors Jonathan Metzger (Royal Institute of Technology in Stockholm), Tuna Tasan-Kok (University of Amsterdam) and Thorsten Wiechmann (TU Dortmund) contributed to the summer school with their expertise and experience. Their lectures on the state of the art in governance research addressed theories, methods, and approaches and provided insight into ongoing research projects. The summer school programme was completed by an excursion to different urban districts of Stockholm, thus allowing the participants to gain further insight into the city’s urban development.

The organisers received positive feedback from the participants on the programme of the summer school. Selected contributions presented during the course are currently under review for publication in a special issue.

© 2010 - 2022 ARL - Academy for Territorial Development in the Leibniz Association