The ARL International Summer School 2022 ‘Exploring Spatial Justice in times of disruptions’ took place from 24 to 27 August 2022 at Stockholm University, Department of Human Geography. The concept of spatial justice encapsulates a number of diverse theoretical, political and normative strands. It sheds light on the way resources are allocated across different types of localities and how spatial patterns influence, enhance or confine people in their opportunities. Inevitably, space plays a crucial role in the reproduction of structural inequality, since the space in which we live limits or enhances individual or group-based opportunities and capacities. Scholarly work points not only to the mechanisms, limitations and implications of redistributive efforts focused on spatial justice, but also to the extent to which related planning and development work is based upon fair, democratic, collaborative and transparent processes.

The concept of spatial justice also provokes a rethinking of contemporary substantial challenges of territorial development, such as the growing disparities between prosperous cities and regions and those that assumedly do not matter (anymore), or access to different types of infrastructures and services of general interest. Many of such and other issues have been addressed during this Summer School. It offered in particular a forum for early career researchers to discuss their work in the light of different notions of and perspectives on spatial justice.

The Summer School ‘Exploring Spatial Justice in times of disruptions’ was organised and implemented in cooperation with the Department of Human Geography at Stockholm University (Assoc. Prof. Peter Schmitt). For the ARL, Prof. Rainer Danielzyk and Dr. Lena Greinke were involved in the preparation.

The participants of the ARL International Summer School 2022 (© Lena Greinke)

Prof. Ali Madanipour (Newcastle University) opened the Summer School. He gave a lecture on the concept of spatial justice, unpacking the variety of definitions of justice. The focus was on three perspecives: firstly, the primacy on social, secondly, the equality between the spatial and the social, and, finally, the primacy of the spatial.

The group is enjoying the stay (© Sabine Baumgart)

Assoc. Prof. Josefina Syssner (Linköping University) introduced a policy perspective on shrinkage. She discussed various types and geographies of shrinkage and as well as causes and consequences. Since policy analysis is a key method in her work, she presented an analytical framework in order to study local development policies that seek to respond to shrinkage. She concluded her talk with a discussion of the major barriers and shortcomings of such policies and what alternatives may be reasonable to consider in the near future. 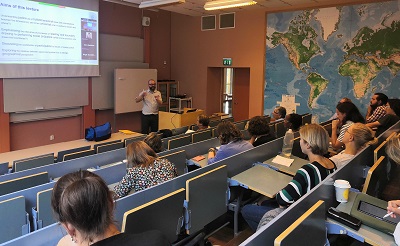 On Friday, Prof. Marc Redepenning (University of Bamberg) discussed spatial justice as a multidimensional concept. In doing so, he problematised the drawing of boundaries as one crucial element to discuss not only distributional and cultural perspectives, but also how participation processes could be better designed to achieve spatial justice. To that end, he argued, for instance, that gamification has enormous potential to strengthen participation that may lead to better distributional outcomes. 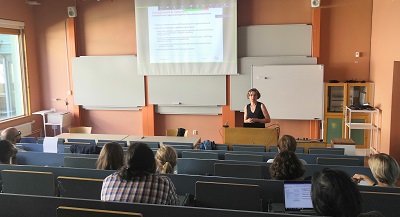 In her keynot speech, Dr. Sabine Weck (ILS – Research Institute for Regional and Urban Development) pointed out that local development actions are potential niches for innovation. She posed the question of whether local development actions can also be transformative, rather than affirmative  remedies towards greater spatial justice. She developed and applied an analytical framework that allows for assessing transformative elements within such actions.

All participating doctoral students presented parts of their PhD projects and discussed them with the other participants of the Summer School. Each of them received also a number of comments by one of the keynote speakers who was assigned to prepare more comprehensive comments based on drafts submitted by the PhD students in advance of the Summer School.

Due to the different research foci of the PhD students and the interdisciplinary design of the event, the participants of the Summer School were able to put their dissertation project into a larger context and to reflect on it critically. Furthermore, the Summer School offered the doctoral students a platform to exchange views on methodological issues and to establish contacts for academic networking. During a workshop, the group identified challenges in their PhD lives, which they discussed afterwards in the larger group and also with the keynotes. 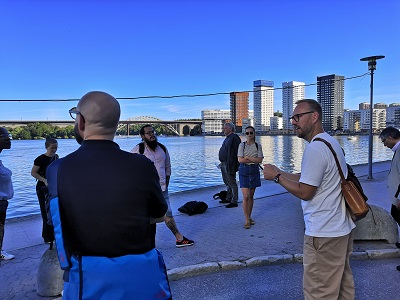 Impression of the excursion to Liljeholmskajen (© Lena Greinke)

During one afternoon, all participants enjoyed an excursion guided by Assoc. Prof. Lukas Smas (Stockholm University) who provided a number of practical examples to current and exciting projects in Stockholm and its suburbs.

The programme was completed by joint dinners, which offered the opportunity for further informal exchange. Fortunately, the participants' feedback on the Summer School was very positive. Following the Summer School, the doctoral students will have the opportunity to publish their work in a special issue. For this, Peter Schmitt (Stockholm University), Lena Greinke and Rainer Danielzyk (both ARL) will act as guest editors in the European Journal of Spatial Development (EJSD). EJSD is a SCOPUS-listed journal that follows a strict double-blind peer-review process and grants a free open access online licence to all contributions. The articles will thus be essential for cumulative dissertation projects, which are targeted by most of the PhD students. The special issue is scheduled for the first half of 2023. 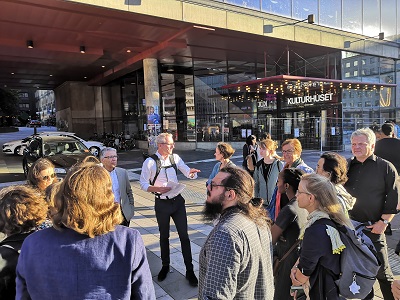